With Courier, Officevibe enables open communication for teams in the workplace 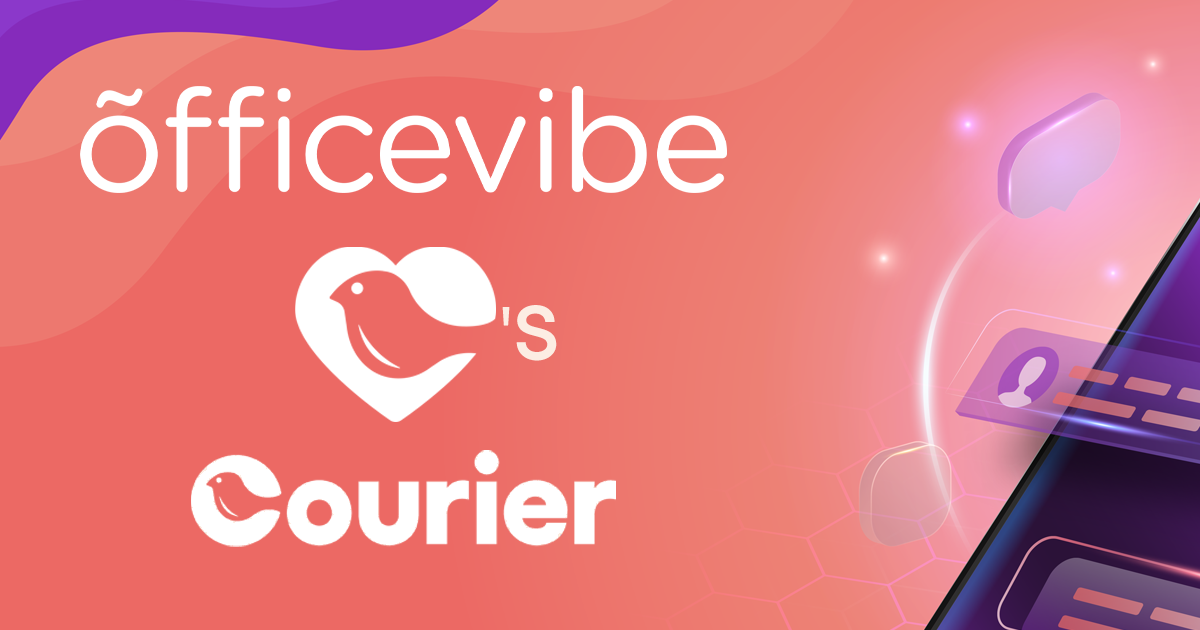 Developed by GSoft, Officevibe is a software solution aiming to improve team engagement in the workplace. The online platform enables managers and their teams to communicate clearly about set goals, provide named or anonymous feedback, measure engagement via surveys, and then quantify these data points into aggregate scores for clear insights. Officevibe relies mainly on Slack, Microsoft Teams, and email notifications to provide these services.

Officevibe first tried building their own notification system into their application, but eventually ran into problems with deliverability and scalability that ultimately called for a build-vs.-buy decision.

We got to speak with Marc-André Bilodeau Lamontagne, Technical Product Owner at Officevibe, about some of the problems Officevibe faced when building their own notification system and why they chose to go with Courier. What's more, Courier helped them solve issues that they didn't even know they had!

Officevibe’s goal is to create an environment in which teams, whether in the office or remote, can develop better relationships with each other through honest communication and clear goals. To accomplish this, the Officevibe product includes several built-in features.

One of those features is weekly “pulse” surveys sent via email to team members, aimed at measuring their engagement over the course of the previous week. Team members can also submit feedback through these surveys, either named or anonymously. Notifications are key to the flow of these Officevibe product features. And when Officevibe needs to promptly send out a massive number of notifications and email surveys per month, reliability is crucial for their business model.

Officevibe quantifies and compiles the data from pulse surveys and feedback into an aggregate score used to measure team performance and well-being. Together with the team members’ feedback, those scores are then delivered to managers as detailed reports with insights and trends. All of this information, digested into possible action items, can be used to schedule one-on-one meetings between a manager and a team member and provide shared agenda items to allow both participants to approach the meeting well prepared.

Officevibe’s mission to improve relationships and team collaboration via honest communication depends on strong communication flow within their application. Reliable and deliverable notifications are integral to that flow.

When Officevibe first created their application, they built their own basic notification service. Their initial needs were straightforward, but very quickly, they ran into issues with deliverability, visibility, and template maintenance.

Marc-André shared that, before Courier, Officevibe was sending notifications to their users through two separate in-house services. Using two notification stacks increased maintenance load on the team and caused issues with idempotency—notifications were sometimes delivered more than once. The lack of idempotency was the biggest concern because of the impact it had on their customers.

In one particular situation, thousands of notifications were being sent out but the delivery would time out. Without strong idempotency measures, when the in-house service tried sending the notifications again, the process would start from the very beginning of the customer list, meaning many users received several copies of a notification. Officevibe’s developers needed to address this repeated delivery issue promptly but a viable solution would involve rebuilding their notification service to include idempotent functionality, which would take extra time and developer resources. According to Marc-André, “That’s the first business problem we had with our stack…[and] we could not find the reason why the stack was having this problem. That’s the main point of why we needed to change our solution.”

This issue with deliverability highlighted another problem with their own service: visibility. In their own system, it was difficult for developers and the operation team to see what the issues were so they could be quickly resolved. Hunting down where an error originated was taking up too many resources.

Furthermore, the Officevibe team maintained all their notification templates in a single file, and making updates to that file was a messy process. The team felt that the file was not organized well, and it was difficult to keep track of all the necessary changes to it.

The build-vs.-buy decision came down to measuring available resources within the company and comparing them with the priorities for the Officevibe core product. While notifications are important to the flow of Officevibe, they are not part of the core application’s domain, where the return on investment into new functionality or bug fixes is the highest. In their own cost analysis, the Officevibe team had discovered that it would have taken at least twice as long to rebuild their own notification system and fix deliverability and visibility issues than to go with a solution like Courier. Marc-André also acknowledged that this cost analysis did not include maintaining the rebuilt notification system to ensure it is always at optimal functionality and ready to scale. Ultimately, they decided that, for the benefit of Officevibe, their best solution would be to opt for the service that Courier provides.

Ready to get started?

Once Officevibe switched from their own notification system to Courier, they immediately saw the benefits of working with a pre-built solution. Maintaining and monitoring the notification system was finally off their plate. They could ensure that all of their notifications—whether surveys, invites, confirmations, or reminders—were delivered as they needed to be. Any concerns about deliverability were fielded by Courier as they came up.

As many of Officevibe’s notifications are delivered via Slack, they found Courier’s support for the Slack channel particularly useful. Officevibe also opted to utilize Courier’s automation API. This functionality lets an application automatically fall back to email notifications if a message cannot be delivered via Slack or another preferred channel. According to Marc-André, this was a need they had that they did not even realize until their own notification system was set up, “and it was really easy with Courier.”

The Road to Success

What does Officevibe’s process look like when building a notification with Courier? All they need to do is validate that there’s a template and data indicating where to send it. The developer collects the data, such as customer ID and choice of channel, and then calls the Courier API. Using the Courier Design Studio, developers can build and test their template easily. Marc-André said, “The first comment I received from a developer when they first started to use Courier was how easy it was to create a new notification.”

Marc-André and his team at Officevibe are very happy with Courier’s handling of their notification service. Courier’s general ease of use, template builder, multi-channel integration, and automation API meet their needs so that they can focus on continuing to grow their own product at the speed they want.

Build your first notification in minutes

Send up to 10,000 notifications every month, for free.

Get started for free